FSH was More Than an Apartment, More Than Educational Support, it is Community…it is Family

Published on September 27, 2018, by Family Scholar House to the FSH Stories Category.

Our Celebration of Education Gala last week was a night to remember. As our extended FSH family joined together to support our mission and our families. We had several FSH graduates in attendance and Keneysha (FSH c/o 2012) addressed the audience as she reflected back on her time at FSH and reflected on now being able to give back to current FSH families. 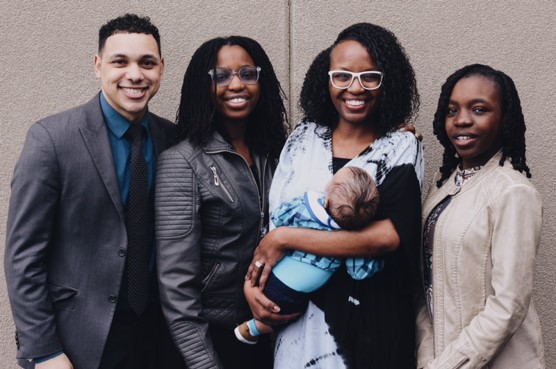 Where did my journey with family Scholar begin?

I think you would have to start with it’s mission to end the cycle of poverty.

I grew up in Florida to father who spent much of my childhood in prison or only saw in summers. My Mom was a single mother who did the best she could and budgeted to the penny just so we could have the bare necessities. It can definitely be said that I grew up in poverty. I did not, however, grow up with a poverty mentality. I always wanted more!

You see, my father while in prison, earned his culinary degree and over the years worked his way from kitchen cook to executive chef. My mother moved to from entry-level secretary to administrative assistant.

In high school I read a story called Great Expectations. You’ll have to Google it! It changed my life! I knew there were and would be people along my journey that would fill the gaps my mother couldn’t, not only financially but in support and encouragement.

These lessons were important when years later I found myself a divorced single mother of 4 and 6 year old daughters and no longer able to live on Fort Knox. I put my girls in daycare for the first time in their lives, started a part-time job making $10 an hour. I  knew I didn’t simply want a job I wanted a career, so I enrolled in school. I knew I couldn’t wait on Miss Havishim to rescue me, I had to get going.

I was nearing the end of my Associates degree at ECTC and knew it would be easier to keep the momentum and continue school at UofL where all of my credits would transfer instead of going home to Florida.

I was accepted accepted to UofL for spring semester 2010.

It pained me to think of leaving my children in Radcliff to travel an hour to school. I knew I couldn’t afford to go to school full time and afford an apartment and expenses in Louisville and I also knew It would take entirely too long to go to school part time.

I got on the phone a called UofL to ask about single family housing they did not have it but the lady on the phone said there is this one program. At that time Project Women was run out of a building on Chestnut St. It was not the FSH we know today. I called and began working the program.

One day I came to pick up Christmas items for my family and I met Jocelyn Fetalver. After she finished with what she had to do with us I grabbed my daughters close and I said see us, remember us please! A few months later I was moving into my apartment at the Louisville Scholar campus. (Yay nontraditional waiting list!) Not only did I no longer have an hour drive to school, I could walk to school!

That same spring I participated in my very first graduation ceremony at FSH and I was in awe. I had no family here in Louisville other than people that attended my church.

It was this day I learned what community and family are. Surrounding me were people giving their time, talents and resources to ensure my family had a secure place to live and the support I need to succeed. They were my Mr. & Miss. Havishims.

People, just like you, helped me along my journey. There were tutors for my daughters, a 17 year old that taught me to play chess, cooking classes and people that thought enough to give a little extra during the holidays so that we would have presents to open.

As soon as I was able I began to adopt a family for Christmas. It has been a blessing each year to my see my initially meager budget for my adopted family grow each year. This is one of the many ways I have fulfilled my promise to give back to the place that has given me so much.  I still keep in touch with many friends I made there and most importantly the staff. Cathe fulfilled her role has “Mama Cathe” in every sense of the word. She would teach my daughters financial skills by introducing them to matched funds for their school fund raisers and support their Girl Scout cookie sales and me personally by making herself available and truly present for various needs. She reached out to me when I lost my father 2 years ago and my mother 3 months ago.

FSH was more than an apartment, more than educational support, it is community…it is family. I am thankful to serve this community by being a merchant of hope to the many patients I serve in my career.

I now volunteer my time, talents and resources as my life has been tremendously blessed. My faith and God’s favor was the constant in my life. The same Jocelyn I met many years ago will be taking maternity leave and I will be teaching her class at University of Louisville spring 2019! My daughter Kennedi will be 16 next month and is a sophomore in high school, Nadia is 14 and is freshman. And I have been blessed with the best, my handsome husband Brandon and our 8 month old son Miles.

When I first moved to Louisville there were banners that donned the streets of downtown that said “Louisville the city of possibility,” I have found that to be so and will continue to make it so in the the lives of others.