Sometimes people come into your life, whether by fate or coincidence, and leave a lasting impact. I recently had that experience when I was given the opportunity to meet a scholar and her young son while delivering a pair of shoes to them. Upon entering their apartment, her son ran to me with the biggest smile that lit up the room. I could tell immediately he had never met a stranger, and his big dark eyes and to-die-for curls could win over anyone.

He was so excited when we opened the box of shoes, a donation from New Balance and their ambassador, Jack Harlow. He held them tight and told me he loved them. My heart melted. They quickly went on his feet so he could show me his hopping, jumping, and favorite Karate Kid moves. As he bounced around I began to talk with his mom. She expressed her gratitude for the shoes, as he was in need of a new pair and she wasn’t financially able to get them. She was so appreciative of this tiny little pair of shoes and it showed.

Then she began to tell me her story. She originally started her college journey as a teenager and often walked past the Louisville Scholar House campus on her way to class. She talked of feeling like God was continually telling her that someday she would live there. She then shared her setbacks, struggles and losses. When she found out she was going to be a mom, she ended up at the very place she had passed so many times before.

As she tried to explain to me how much Family Scholar House meant to her, the tears fell. Tears of joy, gratitude and pride. I just wanted to hug her (I hate you COVID for not allowing that to be possible), but instead told her how proud of her I was, and that she did the best thing for herself and her son. She spoke of God leading her to the path she is on and being with her along the way. She saw the blessing in every opportunity that had been given to her and the people that had reached out their hand to her.

When I left that day, I knew that I was the one who benefited from our encounter. What I thought would be a simple delivery turned into a life lesson. How easily we take the simplest things for granted, like a pair of shoes. Each morning I wake and take time picking which shoes I will wear for the day. And this beautiful soul cried for joy over the sweetest little pair of shoes for her son. She showed me to be grateful for every single blessing and opportunity, not just the big ones or the ones we had hoped for. She will never know the impact she had on me, but I am thankful she did. 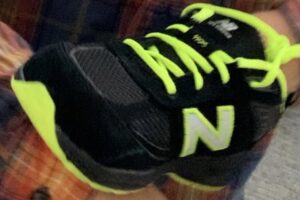