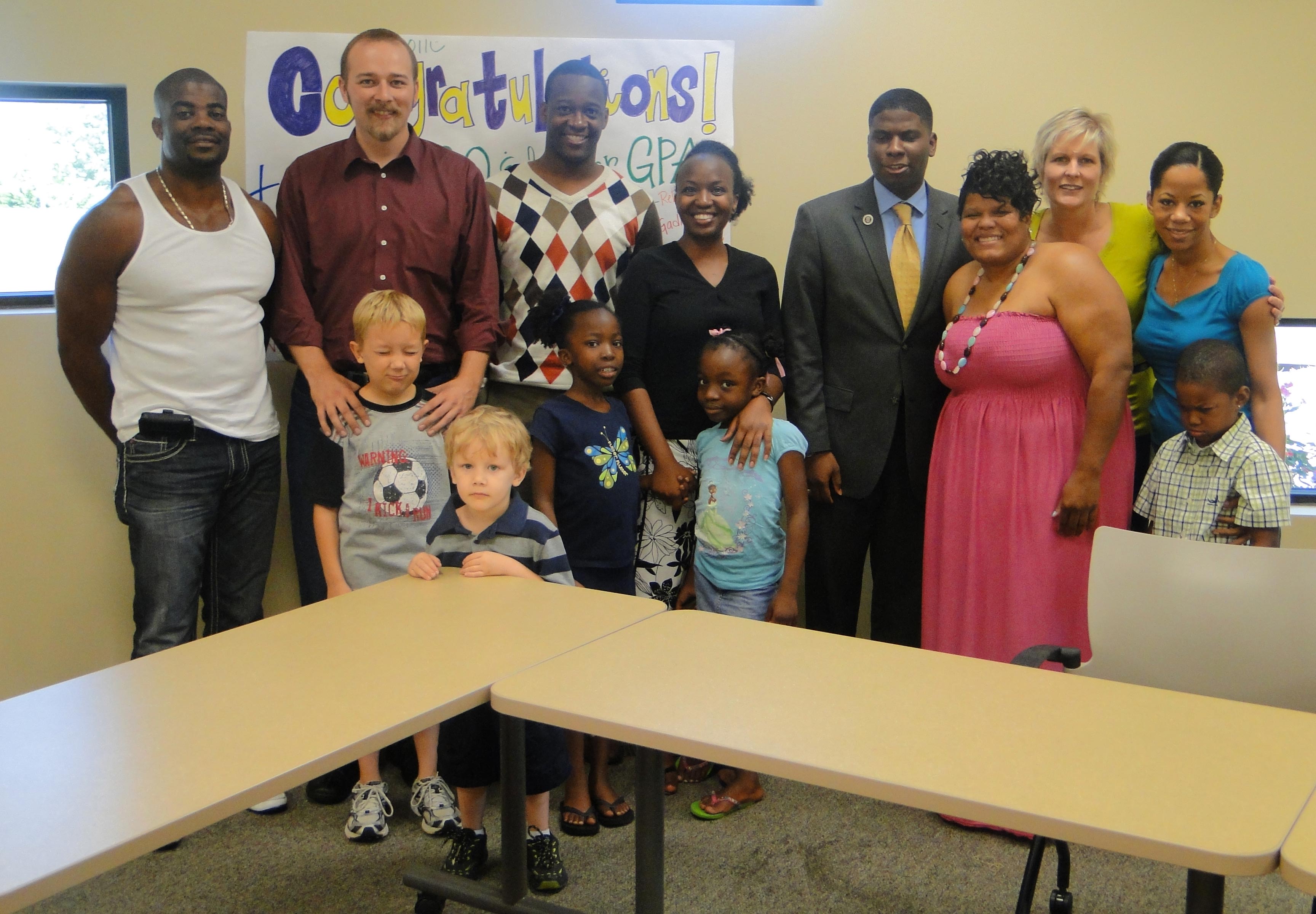 Published on August 29, 2011, by Family Scholar House to the FSH Stories Category.

By definition the word synergy has to do with what happens when different-but-complementary individuals, functions or ways of thinking converge to create a possibility larger than ever-before imagined.  In recent years the word has been thrown around in business and technical jargon as the linguistic darling of corporations wanting to be viewed as cutting edge or progressive.  And so they might be—and it is a fabulous word and concept to employ.

That said, there is a very human aspect to synergy that often gets overlooked, because at its root is this idea that any one of us stands straighter, taller and prouder when we stand as part of something bigger than ourselves—as part of a community, however that community might be defined.

Last Saturday, Family Scholar House welcomed Adrian McLemore (pictured above with FSH families and staff) to our Louisville campus to speak about his life and work as a survivor of abuse and neglect and poverty, a foster child, a college student, a single “father” to his niece and nephew, a social advocate and a future politician (you can read more about Adrian here).  At twenty-five years old, Adrian’s got more life-informing and life-altering experience under his belt than most fifty year-olds, and he’s got plans for turning those experiences into a life lived so that others might not have to experience what he has.

And if you’d been a fly on the wall, or a mouse peeking out of the corner into the space where everyone gathered this past Saturday morning, here’s what you would have seen:

A circle comprised of FSH staff, volunteers and program participants all listening as Adrian told his story, the climax of which is his having become, at age twenty-two, an unexpected single father overnight when he gained temporary custody of his niece and nephew. On the one hand, Adrian’s story is his own, and should be honored as such; but, on the other hand, there were enough connection points in Adrian’s story for most folks gathered, that suddenly, before, perhaps, anyone quite realized it, the circle of individuals had become a community working towards hope, looking for the places where their stories overlapped and finding there a powerful sense of strength and solidarity.

As Adrian talked, you could see settling into the psyches of those listening to him the realization that, “Hey, I’m not the only one!” You could almost feel the release of tightly held shoulders as they all relaxed into the reality that this was safe space, here it was okay to talk about how hard it is to balance every-four-hour infant feedings with a full semester’s load of classes weighing down on you, how impossible it is to feel like you are managing to keep it all together–despite how desperately you WANT to keep it all together.

Three single dads grinned with a healthy dose of self-deprecation at how insane it is to have your three year-old daughter roll her eyes at you; two single moms laughed over how a long hot shower is sometimes the only “me time” either of them gets. A volunteer who is also an ex-offender said, “I see people’s lives changed, workin’ here. It’s amazin’.”

Forget the busy downtown university street outside, or the sounds of college students stumbling out of their dorms on a Saturday morning, or the fact that at least four of those in the circle had numerous appointments, messages and emails awaiting attention on smart phones. Forget all that—because in that moment, in that space, all that mattered was human synergy working its magic, drawing together lives with a fierce amount of pain and struggle; but, thankfully, also enough bright spots along the way that those lives are able to walk with both feet forward now, even on the days when the walking is a little harder than others.

From its inception, Family Scholar House has been about the creation of synergy, about the reality that we are so much stronger when we choose to traverse this life together.  And because of this, we know it to be true that when synergy happens, possibilities abound.